Time Did What We Couldn't 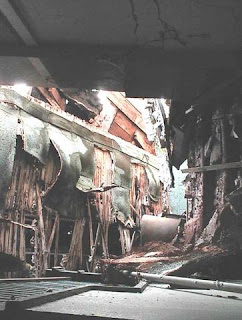 We fell out before noon on the appointed day with our mauls and saws, ten of us. Plague had sent over a 'dozer and operator, but he just sat on the machine and waited for us to start. After all, he wasn't a native. It was our play, to begin.

It was a right good scheme, too, well thought out and practical. The American Theatre was very famous in our county. It had been the host of D W Griffin silents, such as Intolerance, which some elders in our town remember seeing there. It was a potential Historic Society relic if ever there was one in Bowdoin.

Our job was to partially destroy it.

The town of Bowdoin was dying. You could see it, feel it dying. Buildings up around the square were vacant, and some abandoned for a while were falling. We needed help to save the little village of our ancestors.

And so, during one or another city council meeting at Keene's (there were regular meetings but they were too formal, what with Ma there from the Favorite to rwrite down what was said) the plan was hatched to qualify for state development funds.

This was the program to raise property values in blighted regions with reconstruction and bank the additional taxes assessed for more civic remodeling. Redevelopment. Easy as pie, but the state would not buy into just your standard issue ghost town. There were just too many of those out in the dusty Texas plains, so we had to offer up something worth saving.

We figured we could render the American. It was so pretty; ornate and noir-gothic, with fillagreed columns and painted high frescoes and heavy purple velvet curtains. It was designed to allow for one day a week the commons to feel special, if that ain't a contradiction.

Calahan set his sledge on the floor, the handle resting against his thigh as he pulled on his gloves. Woesong circled beneath the screen, seeking where the most damage might be inflicted quickest.

Reloj just stood and looked. Up there in the balcony was where the Blacks were confined, but he had been up there one splendid night with Anna Lou. Right at the low railing towards the east, where the projectionist would be unable to see them.

Woesong thought, in the lower front section, just above the lateral aisle, that's where everything I knew about natural-motion activity beyond Bowdoin was absorbed. We had no TV in his early days, so we were pretty much left to entertain ourselves, to work out our own version of enterprise and folly and old glad social networking.

Nobody saw Abbot and Costello, or Francis the Talking Mule, as cultural forces worthy of emulation, fear or rejection. The movies were westerns or big city gangster or drawing room comedy flicks, and we walked out the same door we came in. It was foreign, like the carnies that came to town with their strange alien critters, and then they packed up and went on out 82 come some sunup.

It was TV followed us home, but that came later.

"Remember the tunes they played so low you could hardly hear in the time just before they drew the purple velvet aside and the previews began?"

Reloj wasn't moving, not even preparing to move. He sang very softly.

"And there was the very thin transparent mesh curtain behind the purple one, which remained to cover the screen for a little while to mute the picture, almost like it was through a glass darkly, or waking up from a dream, instead of drifting off into one."

Reloj turned with his big hammer on his shoulder and walked clean out of the American Theatre. Not saying anything, not even looking back. I followed him. We weren't the first, and the stragglers came soon after.

The guy on the 'dozer watched us head on up and down South Main to our vehicles, then cranked up his own.

Time did for us eventually what we couldn't, which is ever the way. There were other schemes, but none of them worked. But such measure and manner as our civic pride took was expressed most elegantly and honorably the day we came to do damage to our heritage, like insulting our ancestors to please fickle strangers, and didn't.
Posted by Woesong at 11:33 AM No comments:

A Most Excellent Novel

A most excellent novel, chock full of my favorite ingredients. It was freighted, dense and quirky. Love them kind. it was written by a woman, and I love them kind, too.
It came in a little classic brown jacket, probably of the Everyman library. It was recommended in an article by someone I had read of elsewhere. Faulkneresque, it was labeled. Boy, show me to it.
I could not find it. Everywhere I searched for it - online, at our extensive bookshop - I came up empty. I could not even find it listed anywhere. I was embarrassed to conclude the "article" where I'd read the review was actually a short story. Okay, I say, I'll go back and see if there is a fiction identifier in the piece which recommended the ghost novel.
I could not find it. Everywhere I looked, at home and online, was dry of any notion of any series of paragraphs anywhere which may have boosted the Femme Faulkner.
What was the name of that novel anyway? I tried to think. Can't remember. But the author's name ... escapes me.
Oh, well, I know I could ask someone who will know... if I'd taken a class anywhere ever. Then I would be able to fit both writers and their production into oeuvres with a professor guide up at the U.
Wait ... what was the name of the author of the recommendation?
Posted by Woesong at 4:06 PM No comments:

It was just hefty enough to feel important. It was metallic and intricate on it's face; very impressive. About the size of a large paperback.
We handled it, nodded, passed it on. Another of us did the same. It went all around.
I was the one who discovered that you could twist the barrel after shoving the base upward and it would lock in place. I tried it twice, then said, "Hey, lookahere."
I demonstrated the move again, more expertly, assertive, even. Everybody around nodded. I placed it back on the shelf and made to walk away to another part of the plant. Others did, after long admiring glances back at the gadget.
Nobody, then or since, had the slightest idea what the use of it might be.
Posted by Woesong at 2:31 PM No comments:

Isn't it strange we are in their house and not ten feet from them and yet our two families have never spoken, nor even been introduced? I am a bit uncomfortable.
They are arrayed in a family setting, and so are we. They are collected near the foyer and we are near the front door. The house is a rambling complex with an assortment of roofs in a shady noir (as in, I'm not sufficiently visual to describe it) floor plan which leads very soon out of sight.
We must gather our trappings. Plastic toys for our only child, a daughter, strewn about. Yes, yes, we really must go; I'm sure of it. We move about, preparatory to our exit.
Bit first here is a lady who needs assistance. This means professional office duty; else she would only ask for help.
I sit and I listen and make notes. "I see," I say, and "Do go on."
She has the voice of a senior haggard Asian. I glance at her for the first time. "She" is actually what looks to be a middle-aged Hawaiian with deep lines in his face. He is pressing an index finger directly into his brow between his eyes, which are closed. What's he doing, channeling?
To my right and utterly still is one who matches my first supposition based upon the voice I have been hearing. She also presses an index finger just above her eyebrows but her posture is otherwise unremarkable. She remains perfectly still, with her eyes and her mouth closed.
It is really getting on time for us to leave.
Posted by Woesong at 11:14 AM No comments: