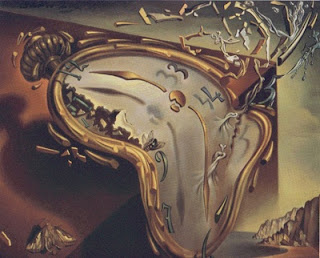 We have achieved the essential in the aesthetics of art. All who encounter our public sculpture respond in dramatic and predictable moods. They are sad and then glad and either reaction is formed out of magical material using masterful and inspired technique.

Our team is good. The Queen is proud of us.

As we proceed, other moods - anger, disappointment, uncontrolled merriment - are set out in the park and all react as expected, including the artists themselves.

Next we learn that  mood and manner determine actual personality, then character. We can create art which in turn generates a nation of Polyannas or Timons. We design a gloomy Sunday, and in time, actual Nietzsche clones.

The Queen has a word with us. It would be ever so helpful were you to - and so of course we do.

What was it you wanted? They call their wives from the store. Oh, sorry I missed the appointment. Shouldn't you be at work? Where did I leave my auto? The big guy from the island; what was his name?

The projections from the royal accountant are not reviewed, nor are the crop futures. Trends are nonsense, like cloud pictures. No public statement by the Monarch or her court is contrasted with the previous editions, because yesterday doesn't exist. Yes, of course it doesn't.

The queen is most happy with us. I don't know why. She praises us for our sculptures. One of us - I forget the name - asks me, "What's a sculpture?"

Our principality was very powerful once; most warlike and appeasing in turn. We were a most sanguine sort, albeit depressed at times. Perhaps you've heard of us?

I forget by what name we were called.

He was very professional. Told me what he intended. He would remove my left leg and place it on that desk right over there. It was somehow comforting, such precision.

I didn't quite catch the diagnosis, the symptom he hoped to alleviate; indeed I wasn't sure there was a symptom and whether removing my left leg would cure it.

I assumed he meant to replace the leg.

We were here for tests, I thought. Oh, well, all the staff seems so unconcerned. Probably just a routine procedure. They inspire a lot of confidence, these professionals in white suits all about us here. Best to allow them to do their jobs. Not my place to interfere.

Posted by Woesong at 5:05 PM No comments:

We're in junior high, a small town in Texas. Mrs Booth, a rather erudite lady for our town,  teaches Social Studies and, as I remember, something called Reading. In that last connection, she informs us, in a colloquy I recall like a Damon Runyan episode, about right and wrong reading, which is really quite simple.

Joe Moss is a prolific reader in our class. Always he  has a book in his hand. He slurps a breath now (later I'd hear this habit described as Reverse Swallowing):

Well, I like to read, and I don't put myself in place of the main character.

My dream involved these two in a building not our own, but a school setting nonetheless. Mrs Booth is trundling along the lower level, left foreground to rear background, towards the office, bottom-right of the ground floor as we watch. I notice Joe Moss has entered the upper level, heading lackadaisically* right to left on the third balcony.

These levels I speak of are enclosed corridors with access to the three floors of classrooms behind them. From the main floor below, which is the gym/auditorium, you can watch all students exit and enter any classroom. (There is a fire escape, but used only in emergencies.)

Joe is silently approaching a door at the close end of the third floor corridor. He pushes the horizontal handle and the scrunch sounds to all.

He immediately breaks into a run to the steps and down them. Mrs Booth also is sprinting. She was too close to the office; now she must retrace her steps at a combat speed for a vantage point to observe whoever is moving during class time, which is forbidden without a permission slip. And Mrs Booth, the hall monitor this period, is charged with demanding authorization from anyone caught out of a classroom.

Joe ducks into the first room from the near stairs on the second level. As Mrs Booth achieves a post from which to scout the three rows of classes, she finds the corridors all innocent of transgressors.

She is utterly defeated. For one can never be sure which level door sounded, nor which room the malefactor either left or entered.

I suspect she suspects Joe, and would like to have snagged him, but he escaped. Whatever he was doing he got away with.

So, what was he doing in that third floor room? Or, what is he doing in the one into which he ducked?  Clearly he should not have been in one or the other.

But Mrs Booth would appear foolish were she to look into every room. She would need everybody's class schedule to see who was out of place, and indeed they may now all be in their proper classes.

She knows I would never tell, nor would anyone standing around. We didn't notice, we would have said. Nor would a teacher rat out Joe, another teacher, and herself, because they none of them cared for either Mrs Booth's high regard for strict discipline, nor indeed for Mrs Booth. And, really, who would admit to slack roll calling or classroom discipline beneath the Booth standard?

Any time Mrs Booth was disappointed in her mission, the entire school was secretly delighted.

* This was the word with which I attempted to stump Mrs Booth during her vocabulary challenge. She offered anybody a quarter were they to confound her with any word from our library books. She only paid off once when under her strict judgment her definition did not properly jibe with that of Mr Webster.

Posted by Woesong at 7:05 PM No comments: