A very efficient librarian hustles to a volume on a table. I watch from a short distance. She expertly rips a print from a large book and starts back to the reference desk with it. I am appalled. I say to her, but, but, and she ignores me utterly. That's a Botticelli you just ripped out! Amateurs, she is thinking. They don't know the ways of the Library. 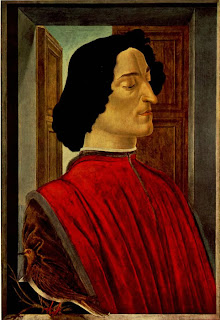 I am walking now in step with George, recently deceased, from my old home town. He was a lifetime substance abuser who grew up in the sixties and went away then came back, chagrined, on the mend, an outspoken definer of abuse and its various dodges.
He says, I hear you're quite the show at a party. He says, and so quiet other times. I think, George is such a nice guy. Then as we trudge along, I'm thinking, hey, wait a minute! He just defined a primary pattern of alkies!
One wakes up, startled into a new world. (Am I also waking? I remember a pleasant intricate dream but none of the details preceeding.) He blinks, confused. Someone comes to arrest him. Yes, yes, very well, come along now. He is nude under a blanket, and he stands up, very tall, and is cuffed with hands behind him. I am given the chore of transporting him. Come along now.
He is in a red ermine cloak, and as he walks, some startling changes take place. One, he becomes shorter. Another, I see his hair color turn to grey. His elegant covering becomes a horizontally-striped Indian blanket. Then, he is no longer cuffed, and he walks into a building, looking back at me in some amusement.
He is Bill Bybee, the class clown from my elementary school. I think maybe I should consult the authorities, but I can't see how they would re-arrest someone who has not been arrested in the first place. This is an entirely different person than the one I started out with, and he seems to know the joke is on me, but what is there to do?
Posted by Woesong at 10:52 AM No comments: