I somehow came across old script of mine, in the form of several scrolls, in a dusty box.

Oh, this, I said. This is the compiled concordance we figured out one year. First I saw it and then others helped, and we were able to explain every single incident in the New Testament according to easily explicable quotidian drama, with nary a reference to magical intercession. We did that.

And wrote it down, and some saw it, but most did not. That's always the way, you know, no matter how popular the work may be. Most ignore anything. Those who had not seen the scroll but heard of it referred to us as Black Christians. They heard we were both, but none of us was either.

But, look you here. The scrolls, each rolled and dusted white and laid side by side, drift into a pasty state up towards the other, older end of the box. They are Catalone then, I see, and I taste one, and it's delicious. Niki J says it is. It was a freelance research project, and now it's dinner. I wonder if that's the way it ever is.
Posted by Woesong at 4:35 PM No comments:

Do Dogs Mind Being Dogs? 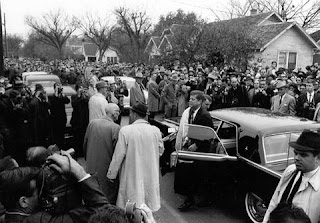 A band of grey suits lounged on a convertible in the era beyond the colors. The suits were drab and loose, as were the men. They are returning from a party somewhere.

"I wonder..." says one of them, the one called Joe, "if dogs mind being dogs. I mean, had they rather be us, or are they satisfied?" He is musing to himself, lounging in the convertible. One or two glance at him.

This is a troupe which performs what resembles baseball, except it's staged down to the minor detail, and Product Placement is the motive force. They set out in two teams inside miniature stadiums, with a desultory and almost lugubrious audience of passers by who sit in the stands and make no display at the antics on the field below. They are there because they must be somewhere.

The troupe goes through the routine of the game, but it's much more melodramatic than chance would allow. At every step of the way, they emphasize shoes, gloves, a certain coffee. They stop to admire often. The crowd seems utterly unmoved.

It's late in the morning, and Joe has lost his companions. Here he is shuffling down a line of "orphans" separated from their sets. The drover looks back several in the line to Joe, says, "You don't have carfare, do you?" I wonder how he knew that, Joe muses.

"Move over there," says the drover, and Joe does. "Where were you last night?" he presently asks. Joe tells him, at Finley's. "Have you spent too extravagantly? Maybe your estate is above your station?" Oh, no, says Joe. I live in a hotel. He thinks that will do him some good.

He is conveyed back to his station. His in-box has mail from Freir's, with an attachment. Probably a project. No need to bother with outstations, decides Joe. He goes in search of his troupe.

They are rehearsing a new set to demonstrate the efficacy of a training cereal. They seem to like the new bit. "Hey, that's good," says Joe. They look at him without emotion. "Leader wants to see you," says one simply.

Joe knocks on the door. The leader is with someone, barks out, "Come on in." He seems stressed. He is settling something in a field far away from Joe's troupe.

When the other leaves, the leader is angry. "Why do you do something like that?" Joe is stunned. "Like what?" he asks.

"We don't need you here," says the leader, and turns away. Two aides appear at Joe's elbows.

Joe is now out on the street. The aides had escorted him there very quickly. Now what? Joe is thinking. He tries to text Freir's, but the message bounces.

I don't know how I became a member of that troupe. I don't remember when I wasn't there. Now I'm not there, I have no idea where I am.

But his hotel room is somewhere, and that's where he goes. What did I do? Joe asks himself, over and over. And what do I do now? He inserts his key.