Parable of the Particle Pair

Guanajuato is known for its  momias, corpses exhumed and evicted from their crypts because the family was not able to keep up the payments. The proprietors of death were able to make them pay eventually by charging tourists to see them.

The city has attempted to overcome its grisly character with an annual music festival which featured classical personalities of world renown, including Lola Violeta Ana-Maria Bobesco, a Belgian gypsey known to enchant the very animals in the forest with her violin. She is leaving the concert hall after another triumph.

The narrow undulating brick street. A light from an all-night market. Crying. Wailing as she moves closer.

Through an open window Lola Violeta  observes a scene of agonizing pain. Desperate adults around the bed with a still child.

The maestra sets her violin case on the street and removes the instrument. A sound unlike any she has produced so far in the night. She expresses with her constant response to pain and suffering, of which she knows well.

When she lowers her bow there is silence. She turns.

The child is in the window. Staring. Transfixed.

The little girl's name is Sonoras, and Lola Viva Bobesco takes her in hand. She will have the greatest teachers, the finest progression into the upper realm of music, will Sonoras. You perhaps have heard her at the Met, or La Scala, or any of the majestic venues known for elite and fabulous presentation.

---
There is a quantum feature by which two particles, say infrared photons, when separated, remain in contact, though they be cast to the far corners of the universe, if indeed the universe has corners, so that altering the path of one affects the transit of the other at the same instant. If the spin of one is oriented vertically, then the other is horizontal, and altering one means the other adjusts to remain opposite. Siblings are like that.  No one knows how this happens! Besides, by Newtonian physics and Special Relativity, it doesn't. Yet it does, somehow. . 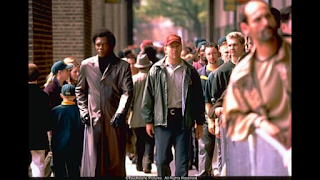 This movie is Unbreakable. Here are some folk walking. The one to our left is a cartoonist. He is very brittle. Bones snap like plastic. He knows by simple logic this must mean somewhere there is an Unbreakable superhero. The guy to his left is a candidate.

---
Prudencio Rodriguez intuits the paired particles. He understands without knowing that if his daughter, the lovely and extremely talented Sonoras, is to succeed, he must fail.

So he sets off on a pilgrimage to accomplish just that.

Prudencio appeared in our former fishing village one year. He walked in a controlled trundle and wore the same shabby brown coat and he would set his violin case down on the street and produce from its contents the most unpleasant screeches you could imagine. He was genuinely and noteably awful, and this in a region where awful was not unknown. I called him the World's Worst Violinist.

For years he went on like that. He stared down into his case. A dollar might appear without notice. Nor did he notice pedestrians. Hardly anyone but me paid him any attention whatever, and he did not seem to notice that either.

Until one day we stopped. We all noticed. The music he played was of an instant most gratifyingly and inexplicably lovely, beautiful even. I have not heard the like since, and I have heard Reloj play his Viva Tequila.

Prudencio Rodrigue dropped his bow in his case, his violin on the street and trundledd away. Some say he was crying, but I was behind him at the time.

They say the City gathered his instrument and case and the few dollars he had won that day and took them to Lost and Found. It was expected he would certainly come for his instrument. He never did.

The next word any of us had of Prudencio Rodriguez was in our local Sentinel some weeks later. 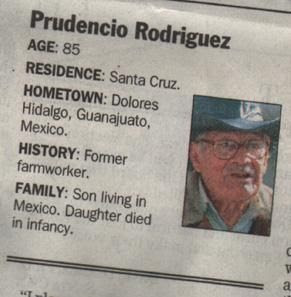 Posted by Woesong at 4:33 PM No comments: