I am being fired. Okay, I walk away from one of those starched impersonal euphemism-laden sessions while the headcutter is amidsentence, then I pause outside the door. Hey, wait a minute! I'm being canned as a passenger of this rapid transit joint!
I was riding the train, which was proceeding suddenly over a narrowing track which became a roller coaster rail over sheer mountain passes. This is supposed to be a dull urban commute. I was surprised we made it across gaps thinner than our tread. Maybe that's why I'm not needed aboard no more. I was distracting and exhibited a lack of confidence with my screaming.
I am going to the office, or was. The office is now a store which has nothing to do with me. I worked there before when it was something else. I'm not sure why the present establishment allows me to keep my computer and desk in a small space in the midst of their business. Funny. My prior employment allows me to remain on the premises, through either default or indifference, although I no longer work there, or anywhere, and anyway my former firm is long gone from the neighborhood. And yet the public conveyence to and fro that jobsite has just fired me.
I see my computer is gone. Oh, yeah, Niki J has taken it home. No, wait, she says, look. She has redecorated; there is now an arras over the monitor. I think about how that must look. The workers all about may think I begrudge them a look at my monitor which is ensconced on their grounds without justification.
I am outside now, walking home. I think again about Scoob. Always I have dreams in which I've lost sight of Scoob. There are canines abounding all up and down the road, some he cavorts with. He's not among 'em. But I see him now, leaping in distant shadows. I know I'll find him, but it scares me still.
I wonder when Maya our new little diva pup will make her charming way into my dreams. 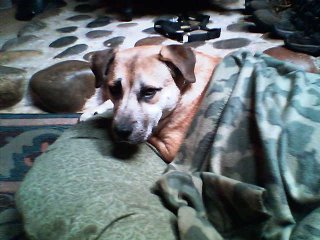 Snakes in the Basement

I stand in the corridor of an old castle and watch them file by. They are going to a funeral for a fallen warrior, all the full-time vets in funny hats and merit badges, and my old simple boss is dumpily in somber step with this crew. He doesn't even turn his head to look at me standing by the side.
I continue outside and mount my bike. I am riding down a remote lane along the moors now like in Jane Austen and Bob Thomas steps to roadside. He's a year older than me back in high school. That's him heading this story, taken at a reunion in 2005.
Bob thomas wants to know, "Are there snakes in the basement?" I had just seen a funeral procession headed there, so I said, No, no, all clear.
I ride out, about, and return. It's an indeterminate number of hours later. I am swarmed by an angry mob.
They are raging at me. What'd I do? I didn't do nuthin' - what'd I do? They are screaming and threatening. You done it, they yell. it was you? It was who? What'd I do.
Slowly at a high decibel the story slams by in jagged shards. Bob Thomas was bitten three times by water-headed cotton moccasins in that very basement I told him was secure. He has developed a severe palsy as a result, like a Parkinson's patient. Here's Bob Thomas now, making a shaky entrance.
I sit with him while the mob simmers, quiets, ambles off. I'm sorry, Bob Thomas, but I didn't know. He doesn't say anything, just shakes. I sit with him for a time, part in commiseration and apology, but mostly I'm thinking what will the mob do if I make to leave?
In that flat pastoral land, I sit sadly, showing great empathy, while Bob Thomas shakes, and the mob lurks, muttering growls audible across the grim country.
Posted by Woesong at 12:58 PM No comments: