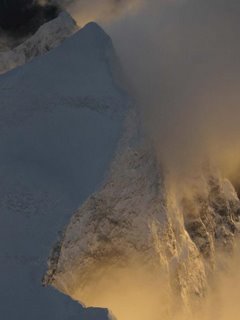 Onscreen someone walks in a misty foreground.

Behind there looms a shrouded mountain. The scene is graygreen, and the soundtrack is low-pitched and ominous, like an invisible leopard breathing.

The lights come up and the picture disappears in a sequence of numbers. The fat guy stands up down front.

The three at the table are blinking, confused.

"It's enough," assures the fat one, with a dismissive snort.

"We had expected more of a sampling..." comments another of the three at the desk.

"Now, gentlemen, you cannot expect me to give up the Secret of Mount Hozomeen in a preview."

"Yes, but - we really have insufficient data on which to base any commitment..."

"That's fine. Perfectly fine. I really must march-order here, if you'll excuse me. Dreamworks is expecting a showing tonight." The fat one begins to unplug his projector.

Next the fat one moves to roll up the screen. He is obviously waiting. There's a conspiratorial grin on his mug. He keeps his unconcerned back to the desk to the rear of the screening room.

When he steps to take down his screen, he sees that the room is now empty.
Posted by Woesong at 10:15 AM No comments:

The pageantry, that was the main item. It was elaborate and in full military dress. It was all working quite well.

Our own private island in the Marshalls was flourishing. It became a transition zone for executives and finance officers from large corporations doing business with China. There had been threats. We were known to be secure.

They landed on our unmapped island and they stayed in our luxury hotel off any grid and they were met by emissaries from the Mainland and they flew away in Chinese aircraft, and their passports never snitched on them. As far as could be read by the State Department, they had taken a vacation with us on our island. Our competitors have laid claims that we are contributing to industrial espionage, perhaps the nuclear sort as well, but they are only jealous.

Our guests, they sometimes ask, you are doing this to snub Taiwan? You are partial to communism? We say, no, no, we are only partial to us. We came into possession of this island and looked about for a means of making it pay.

They come to us, our secret relay station, more and more often. We have certain considerations from the Mainland. We are able to attract some of the best staff in the South China Seas. Hong Kong is too crowded, and so is Singapore. For a business wishing quiet, or security, or discretion, they fly to our island without name and we take care of their concerns.

It is said by some, yes, but there are certain repurcussions? There are consequences? Oh, we reply, there are all sorts of secondary effects to all we do, each one of us. Some of the best intentions work out the worst.

But they never stop. Every week there are more of them. We smile and bow and escort them to their rooms and in the morning the Chinese will be here.

Posted by Woesong at 2:13 PM No comments: