WALKING SHOES
I am wandering away from home. There is someone who is nice to me. We disrobe. Then I notice she has other interests. Another guy is with her, and here I am. She slowly casts more and more of her ministrations toward the other one. She smiles at me, wanly, with regret, like a good-hearted blackjack dealer when you draw a queen holding 16. 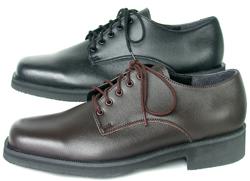 I will not stand for this. I will leave immediately. But it would be less dignified and dramatic were I to sort around in the apartment for my shoes. That's no way to stage an exit, rummaging for shoes on the floor while your lover has a fling with another.

I just grab a pair and leave.

I notice that one shoe is a small house.

I exchange them. It's all right now.

I am home again. There's company. Hi, company! I sit with my wife and company. I can relax now. I put my feet up.

"Man, I think you could afford a better pair of shoes."

I look at them. My feet are in the light of the TV, crossed at the ankles. My wife knows my shoes, and these ain't them. They are dark and ripped, one of those perforated styles of the twenties.

I try and think of an explanation for why it is I wear strange shoes.

When I was young, I sat in an auto out in front of Bontex Cleaners, owned and operated by my Dad and his brother, Uncle Bush. Voices inside rose. Anger. I sat for some time. I was a patient kid.


Dad came out and drove me home, and later I heard him say to Mom, "...that trick Bush pulled in front of Timmie..." I knew it was about the heated discussion, but I never had understood any of their words.

Sometime not long after, Bush bought Daddy out and there began an adventure in searching up a new career. My Daddy was very bright, and he was easily the greatest sportswriter on the small town paper where he worked for a while, but he had no higher education and we struggled. He entered into a campaign for County Clerk. We festooned our old Packard solid with posters for Hut Bowden, nailed up placards, knocked on doors, and he even went on the radio (gratis, I believe, as he had some sort of in with the owner at KFYN).

He came in last of four, and his confidence was shaken considerably, and he leased Quality Cleaners in a town sixteen miles away, and that's what he was doing when he fell down dead one day.

So two nights ago, I was having two dream at the same time. One had a dual track; I was at once and the same time at home in the Santa Cruz Mountains, dreaming, and also lying in a tent with Niki J at the Bright Angel Campground near the River inside Grand Canyon. I could wake at either location, because I was in both. It's like the instant when you decide whether to commit your weight from the dock into the canoe. I was very confident of this. So I continued my dream.

And it was about the topic debated by Uncle Bush and my Daddy which had set our troubled course all those many years back. I never heard a word back then, but I heard them now.

It was about Mel Ott.

Uncle Bush thought him the greatest outfielder ever, and a true power hitter, and Daddy said he was a lout and a bum. Couldn't hit a cow with a bass fiddle. He was an all-star, raged Bush, and Hut laughed, yeah, in the years when they played with slabs of beef on one hand in cow pastures marked off by barbed wire.

That was it, then. They were arguing about Mel Ott. I don't even know who he played for, and I have no idea who was right, but it sure is a relief to finally know the cause of all our trouble.
Posted by Woesong at 11:44 AM No comments: