I'm just so sad about it, but what can you do? Four months! Just snipped out of your life like commercials in TiVo.

I say to brother Joey, hey, I'll miss you, I'm sorry. He understands. He's very stoic. But then, it's me that's going into the slammer.

I don't feel guilty because I didn't do anything to deserve it. I just was. It's not even karma, it's the Lottery in Babylon, the one Borges told us of where interest is spiked if the drawing handed out bad news as well as good. You win ten million. You lose your house, your wife runs off. The citizens actively support it because they see good times for them which will mean more only if bad goes down somewhere.

I report to the front desk, which is wide and waist-level. A little lady, young, is across from me, and she is giving instructions. But I cannot hear in the clamor of the room. But the desk is wide. But I cannot lean towards her because that would be, I don't know, forward. And she doesn't care to lean towards me because I'm fixin' to be a jailbird.

She talks on in the same voice. I wonder if it really matters I'm understanding none of it. After all, I have the big picture.
Posted by Woesong at 8:55 AM No comments:

I am afraid. I am on my back and someone is investigating. It's Lennin. Yes, Vladimir. He is adeptly slashing my pockets one by one. I have on a voluminous frock overcoat, and he is methodically slicing to see if I have anything hidden. I don't know whether I do, but I know it's curtains for me, for suspicion is sufficient in this camp.

Strangely, the above isn't the image of the Lennin of my nightmare. It's as if he's played by someone else, so it's a movie within a dream, which probably explains why I'm not terrified. The Lennin of my dream looks like the sniper and subway hijacker from French Connection.

Wonder what it means to have Lennin looking for contraband in your clothing.
Posted by Woesong at 7:31 PM No comments: 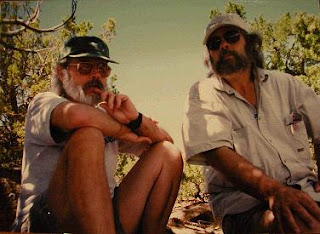 My dreams are in shades of gray, but they shimmer.

In an urban setting is a grotto, an arroyo seco; the buildings seem to be melting into a central dry creekbed, like sewage in slums, but this is an upscale mercantile mess. We pass down this chute on foot, some of us.

And some of us expire. We carry them to the banks of the seco, and we place them carefully and tenderly on the bluff just off the passage. (The bottom of the arroyo is as uneven as any creekbed, but I don't see how a current could have formed this configuration in a major metropolitan area.)

A moderately overweight one with a pained but kindly expression is settled beside the arroyo. We ceremoniously carry and deposit him and return to the arroyo. There is nothing else to be done.

The mansion off the arroyo has many rooms. I'm passing from one to another, and there is really no symmetry. It's like people; some end off and another begins and there's no rhyme or reason to it.

I know before I see the large crates. Reloj is back. I see his goods stored fresh from the movers in an airy fringe to a corridor off a suite. I see Reloj's hair is long, luxurious even. He turns to see who is coming, then turns back without greeting.

I'm sitting with him over breakfast, or maybe dinner, as I'm not aware which end of the day we belong to, or what's on the table. There is talk, but strangely we aren't talking. I am conscious he does not seem aware of me.

There is a point when he will be leaving, of course, and then he's gone, without any reference to that transition. I just become aware at some point he's gone.
Posted by Woesong at 11:56 AM No comments: