He worked in Supply most of the time I was in the unit. Hermerejildo Rocha, called Herman, was a Spec-4 with a laconic manner and a steel plate in his head from a recoilless rifle injury in Vietnam. He had waived any disability claim in order to re-up in the Army for a six-year term. When asked why, he shrugged. 'In business back home, they don't pay any attention to you when you're my age.'

Home was Garden City, one of the most depressed regions of the nation then or now, and, even were there some sort of economic miracle possible, it still would be in Kansas.

He and a buddy from his home town had remained together throughout their enlistments. The buddy was also disabled in that war, with a rifle wound to his foot ... from his own weapon. "It was bad over there," Herman admitted, "but ..." and he just shook his head. The buddy seemed always very depressed, spoke in a quiet voice, had a pretty wife who danced for the boys in one of the many go-go grind shops along the main street of Lawton, OK.

I had a very soft time in the Army during those horror years for some troops. I was able to drive home most weekends. And one Sunday night or Monday morning I came back to the post to discover the laces missing from my dress shoes.

I lived in NCO quarters, though I wasn't one, and neither was Herman, my roommate for the period just before his ETS to another post. Our boots and shoes were displayed under our beds in the two-troop rooms, and mine were bereft of ties and Herman was gone. I guess he was just short a pair for his dress green traveling uniform.

Why not just requisition from me? He'd never see me again, so why even bother with a note? He was probably too busy with packing to even wonder about somebody already a ghost.

Rocha just walked into a dream, leaned on a bureau in his uniform, looking just as he had way back when. I didn't speak to him because of distractions in my dream, and I regret it now.

I wanted to ask him about the laces.
Posted by Woesong at 11:19 AM No comments:

I need something, for I am cold. I will drive somewhere there is perhaps a sweater.
On the roadway (which like in all my dreams is familiar to me only in my dreamstate) I encounter signs which tell me New South River is just ahead. Okay, I think.
Houses thicken until I am in a veritable nest of single story white frame one- and two-bedroom structures. They are set out like cabins, with little space between, as if a flood had gathered them along a river run and left them here. They were all in good repair, as far as I could determine, although there was not a sign of life about.
Oh, here's some. Milling about an old fashioned storefront with steps to a porch. Inside there is a jumble of dry goods as if the prop folks had quickly dumped it onto the set.
"The New South River is historic!", reads a sign over a bookshelf. There is a guidebook there up high and I think I will learn now about New South River, which I never heard of and don't want to ask about because maybe I should have.
There is a map on the wall showing the river itself, which seems to be running down the center of the US, somewhere in the Great Plains. It is drawn in a very dark blue line to rival the Mississippi to the east. It is progressing for many miles over flat terrain; no loss of elevation to boost it.
How is it running, this river? And, at the spot where it is drawn, there is no river in the real world.
I wonder if it matters. There is a lady who seems to be in charge. At least she has much enthusiasm and she keeps moving and everyone smiles as she passes by.
There's a ghost river, and some are very enthusiastic about it, but I wonder what can be the utility of the project. I see one worn rudimentary pamphlet and doubt it will become a best seller. Yet all around there are avid believers in New South River. And how can anything labeled 'new' be historic?
From all about me here there is great hope and some joy about a current which does not exist  I walk out of the store alone.
Posted by Woesong at 5:46 PM No comments:

It was a most satisfying accomplishment, if only because the results were so far above either effort or expectation. I had appended a singularly pedestrian comment unto a blog posting.

It was altogether quite reasonable, maybe a bit so sensible as to appear banal. (A trivial remark on second mortgages, say, will abstract to profundity quite well, as: "A citizen's Liberty is not owed, but paid to his nation's military.") The point I have forgotten, as have all who ever knew of it, because the sole paragraph I had supplied was strangely unmoored from the particular and cast into the general, as a boat in a storm.

My comment was copied, shared, passed on, until it went viral. From large-scale news sites to small neighborhood blogs, my lines appeared, were read, commented upon, repeat.

I personally saw no benefit because only my alias was attached to the newborn wisdom of the paragraph. Then, over time, my by-line disappeared, and a variety of famous names was substituted, from Aristotle to Hume.

Hey, I wrote that, I said in the small forum in which I was able to appear. But, as one or two asked the circumstance, and I was unable to supply without cheapening the whole enterprise, I soon gave up all attempts to mount the bandwagon I had launched.

Well ... not really launched, except as the pebble to the landslide, because my own small candle flame spark to the project was nothing like the sun it became. So I was left to muse whether all fame were like this.
Posted by Woesong at 10:04 AM 1 comment:

A Repetition of Unintelligible Sounds 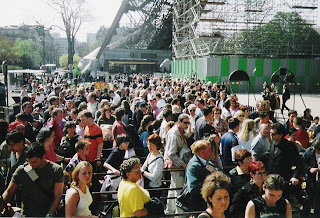 We sometimes gather at bus stops, but the buses no longer run, and we know it. It's mostly dark after the sun goes down. We have this sensation of the day ending for months now.

Someone will hear something said, step up to anyone on the street, inquire. They're going to do a deal. My cousin works there. Everyone nods and eventually the group dissolves, the elements reforming on down the road.

Almost any sound will bring a pause, and everyone will look towards it. There are fewer vehicles, and inside them faces look grim. They do not look out at us, those who are able to ride in autos. "Hear anything yet?" is the most common greeting on every street.

It isn't clear what we're waiting for. Nobody knows how we arrived at where we are. Everything just stopped. All scheduled events weren't canceled, they just didn't happen. Groceries and markets are still open, and there's no rush anymore. We've in some sort of slow-burn emergency, but we continue the same day and night for weeks now, so the anxiety is low-key.

Milling in front of store windows where nothing is for sale except for perishables. The power doesn't work in houses so we come into the street to find where broadcasts are happening. In furniture and convenience stores, with speakers high up above the show windows. We stand on the street to silently watch and listen. Announcements are sporadic and brief.

They tell us of plans. We are going to package our debt, we were told recently.

"We will attempt to lease the deficit to other nations which we don't owe already. There is an electronic auction in Canada. It is suspected good will come of this initiative from Mrs Margaret O'Connell of Peach Street. Thank you, Mrs O'Connell."

It will be like all the rest of them. They have ideas sent to them by Concerned Citizens. They say they will implement the plan. Then they come back in some days.


"It was actually not a good plan from Mrs O'Connell. It would be like selling the hangover and not the party. We expect more of our citizens. This will never do."

Then we will hear out of the speakers:

"Mr Magruder has suggested that if all citizens were to take turns dragging on a large treadmill, then power would be restored. We could then export what we don't need to our creditors. Thank you, Mr Magruder."

We watch the guy who is the only one we will see all day and into the night who is smiling. It is like a hasty drawing of a smile, however. It is unnerving that the only notions for correcting whatever has gone wrong come from individuals writing to the station.

The central, maybe only, state of our being is anxiety tamped down just below panic. The children still play in the park, but it's as if they are at a funeral. They know something is sad, but not what, and nobody is able to tell them. How do you tell a kid that everything just stopped?

Some will begin, "I tell you, if only we'd ..." and then someone else will always cut him off. "There's no need to go over the past. What's done is done."

We had grown accustomed to the noises in our town, of course, but what we hear now is often unfamiliar; sometimes ... disturbing. A sort of rumble, a muffled concussion, and always just beyond sight. We all stop and wait, everyone quiet, but it will not repeat. We are waiting for a repetition of an unintelligible noise, is what.

The women seem most patient, are the most assured. They keep us up, tell us we'd better and we ought to and don't let this or be sure of that. They are marvelous. I don't know what the men would do without them, nor the kids, although nobody believes any steps we take will ever make the slightest difference.

"Mrs Kinoffka of Liberty Street has an idea that throwing wide our borders and allowing everyone in will dillute our difficulty like how a cesspool be cleaned by a creek in a storm. Thank you, Mrs Kinoffka!"

I remember the countenance of my mother in her casket. Her hard last days had left her looking like her stern elder sister. And there was the begger with her child in the market that year, Mazatlán, her face a mask of woe. The torero, Eloy Cavazos, on missing with the sword, lays over the back of the animal and moans to the heavens.

It's a very common expression now.
Posted by Woesong at 7:32 PM No comments: